Best for the World Environment

PBPSA member Thermaflex (North West Europe), the innovator and manufacturer of insulation and pre-insulated PB-1 piping solutions for thermal energy distribution, was recently recognized for "creating the most positive environmental impact" by the international non-profit organization, B Lab, as part of the annual ‘Best for the World’ nomination. This nomination honours businesses that belong to the top 10% of the 1800+ Certified B Corporations from 50 countries and 130 industries worldwide. 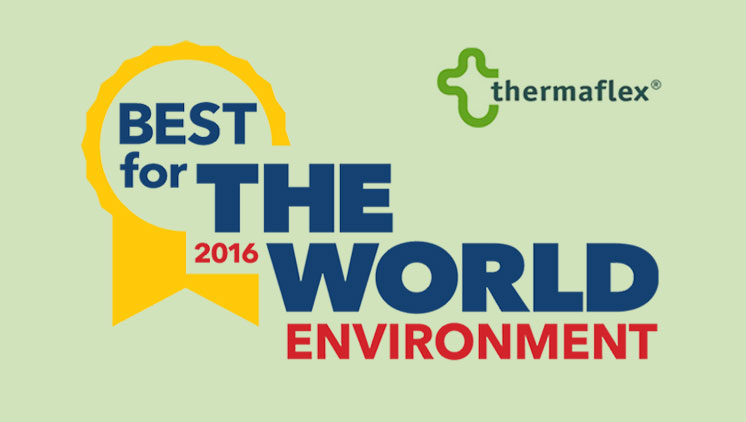 Thermaflex honored as B Corp 'Best for the Environment'

What is a B Corp?

B Corp is to business what Fair Trade is to coffee. Starting in 2006, the B Corp movement boards for-profit companies to meet rigorous standards of social and environmental performance, accountability, and transparency. The B Corp vision provides that in the future all companies compete not only to be the best in the world, but the best for the world, leading to a more shared and durable prosperity for society as a whole.

As part of the founding class of B Corp Europe, Thermaflex North West Europe was certified in early 2015 for its social and environmental impact, accountability and transparency through the B Corp assessment, which evaluates how practices impact employees, customers, communities, and the environment. In its ambition to become a global B Corp, this year Thermaflex Central -and North East Europe were the next two regions to become B Corps.

Best for the World

The B Corp vision provides that companies compete not only to be the best in the world, but the best for the world.

The B Corp ‘Best for the World List’ sets the gold standard for high impact companies, assessing a total of 1,800 Certified B Corporations from over 130 industries in 50 countries, all unified by one common goal: to redefine success in business.

‘Minimize the waste of energy, maximize the use of renewables’ makes the vision of Thermaflex absolutely clear. In its markets, numerous developments underline that, such as its continuous improvements on energy performance, material health and recyclability of its solutions, sealed through Cradle to Cradle certifications.

They also recently launched a reclaim program to take back all residual insulation waste products and recycle them into the production process. Thermaflex uses Polybutene-1 extensively for its thermal pressured piping systems particularly due to its best-in-class long-life and sustainability credentials.

Also in its own organization, various in-house programs are aimed at minimizing environmental impact. In Europe, 95% of the energy use of Thermaflex’ facilities comes from renewable sources. Quality assurance and environmental management systems are implemented to continuously monitor and improve operational processes, which led to a 22% overall score improvement in their recertification this year.

Thermaflex also elevates this impact on a consultative level. In March 2016, it was invited to make an active contribution to the strategic implementation of the United Nations District Energy in Cities (DES) program, as one of the 14 private companies to play an advisory role alongside governments and civil society associations to facilitate energy efficiency and renewable energy through the deployment of modern district energy systems. It is also active in other strategic programs of the UN Environmental Program (UNEP), such as the Global Alliance for Building and Construction (GABC) that was formed to help realize the COP21 goals of late December.

“The certification of our benefit model through the B Corp framework is not only a great honour and tribute to our efforts, but also provides guidance, focus and partnerships in achieving our dream of a sustainable future for generations to come” Gerrit-Jan proclaims.

Want to learn more about B Corp? Visit www.bcorporation.eu