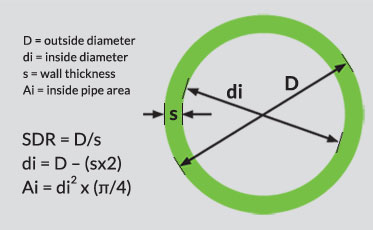 Due to the higher SDR ratio of Polybutylene (PB-1) compared to either PE-RT and PEX, Polybutylene piping systems deliver the following benefits because of its lower wall section requirements for the same pressure rating and outside pipe diameter: 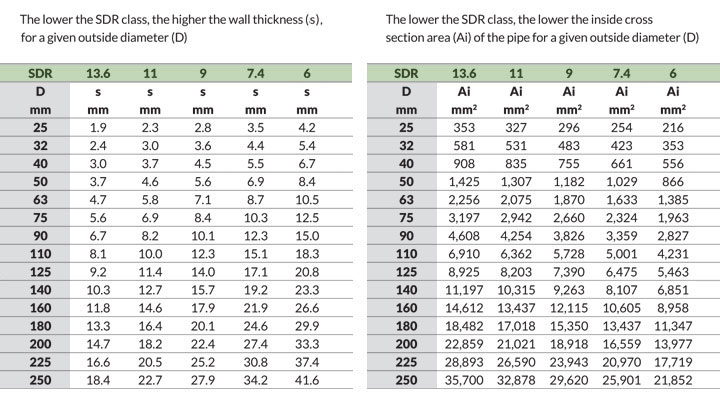 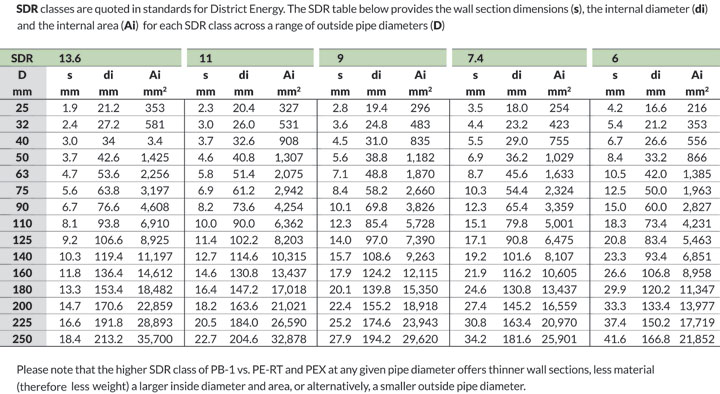 The higher the SDR Class the lower the water hammer at a given flow rate. Polybutylene (PB-1) has the highest SDR Class compared to PP-H, PP-R, PE-RT and PEX 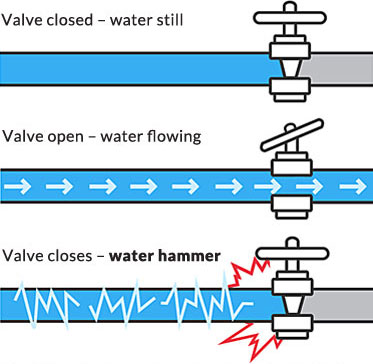 The low elastic modulus of Polybutylene, combined with reduced wall thickness gives rise to a low surge pressure for a given pipe OD and pressure rating. The table below compares maximum surge pressure for 38.1 mm (1-1/2") OD pipes of different plastic materials, designed for the same pressure service.

When compared to PP-H, PP-B, PE-RT and PEX, Polybutylene has the highest SDR Class and delivers the best acoustic capabilities including the lowest level of water hammer. 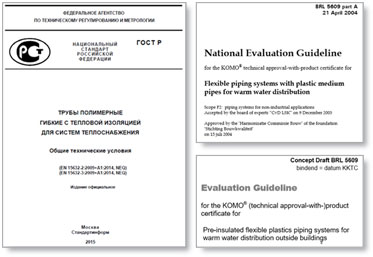 Per the Russian standard and the Dutch guideline the table (at right) is an excerpt of the relevant table showing the SDR classes for the listed materials at different pressure ratings. As indicated, for each operating pressure Polybutylene is listed in the highest SDR class when compared to either PE-RT and PEX. The section below explains what this means, why standards refer to pipe dimensions and SDR classes and what are the benefits for pipe system specifiers.

To illustrate the performance of Polybutylene, PE-RT and PEX in relation to the given operating pressure of 8 bar at the small pipe diameter of 50mm ø, the table and diagram below provide a comparison of the internal pipe dimensions required.

Per above, at the same water pressure, the larger inside diameter of Polybutylene 50mm outside ø pipe delivers a substantially higher flow rate than the other two materials. Taken the other way, at a given flow rate PB-1 pipes yield a lower pressure loss requiring less energy to run systems and/or pumps with a lower capacity.

As shown in the graphs above and for the purposes of comparison, PE-RT may be considered the benchmark at 100%. When comparing the inside cross-section area of a 50mm ø pipe (left graph) Polybutylene clearly outperforms PE-RT with an additional 27% of volume. Also, in comparing the amount of material per meter for a 50mm ø pipe rated for 8 bar (right graph), Polybutylene pipe uses 29% less material than PE-RT.

Once again for the purposes of comparison, PE-RT may be considered the benchmark at 100%. Per the above graph (left), using the same operating water pressure, a 50mm outside diameter pipe (8 bar) made from Polybutylene delivers a substantially higher flow rate of +35% when compared to the identically rated PE-RT pipe of the same outside diameter.

Measured using the other comparison point (right): at a given flow rate (output) Polybutylene pipes yield a 44% lower pressure loss versus PE-RT pipes. This means that Polybutylene pipes require less energy to run a system - or - can accommodate pumps with a lower capacity for the same output. 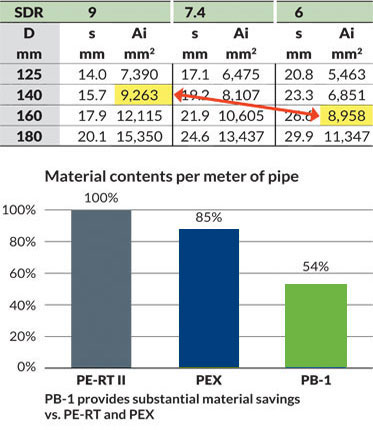 Due to a higher SDR rating (and therefore a thinner wall section) a Polybutylene pipe of 140mm ø delivers the same performance as a PE-RT pipe of 160mm ø, but with a smaller outside diameter and larger inside pipe cross-section area.

Polybutylene is a versatile material for all available jointing techniques

What does a higher SDR class mean in practice?

Webinar:  Benefits of Polybutylene for pressure piping systems
– What does a higher SDR class mean in practice?