Polybutylene has an operational record in Europe and Asia of over 50 years continuous service in pressurised hot and cold water installations and is widely recognised as the technology standard for these systems. Since the first successful installations, advances in material technology and production processes, combined with the introduction of standards protocols, has advanced the performance of Polybutylene piping systems even further.

Polybutylene piping systems have revolutionised how pressurised hot and cold water systems are installed. No bending tools, no flame, no fluxes, no chemicals.

Piping systems from Polybutylene have revolutionised how hot and cold water pressurised systems are installed. With the installation of Polybutylene piping, no bending tools are needed, no naked flame, and no fluxes or chemicals.

Pipework of up to 50mm in diameter is supplied in lightweight and easily handled coiled lengths of up to 500 metres. Installations can be made in suspended floors from below before ceilings are fitted and flexible Polybutylene pipe can be cabled around obstructions and through joists. Continuous, flexible pipe means fewer joints providing greater system integrity.

With Polybutylene, many installations can be made without accurate pre-measuring, since it is easy to measure and cut in situ. Also, the light weight and ease of handling of Polybutylene piping allows factory pre-fabrication and rapid on-site installation when timing is critical such as installations in cruise ships.

Polybutylene piping systems will not scale-up in hard water areas or corrode in soft water areas.

Polybutylene piping systems have an array of performance advantages which have made the material the latest generation choice for piping systems.

If freezing does occur, the pipe expands to take account of the added volume, returning to its normal dimensions when the thaw comes. The same Polybutylene thermal characteristic operates in reverse making them cool to the touch, even when high temperature water is being transported. 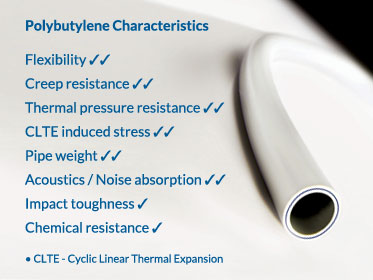 Polybutylene piping systems will not scale-up in hard water areas or corrode in soft water areas. They absorb and suppress sound, rather than transmitting it (Case study: Royal Albert Hall) and they are not subject to 'water hammer' particularly in areas noted for high water delivery pressures.

Long-term ISO 9080 tests performed on Polybutylene pipes project service lifetimes of 50 years or more for Polybutylene hot water pipes operating with water at 70°C, at 10 bar pressure.  ISO 9080 tests are carried out according to international protocols by independent and accredited test agencies such as EXOVA.

Environmental impact study of piping materials by the Technical University of Berlin rated the impact of Polybutylene as low.

Piping systems' environmental impact in areas including landscape scarring, emissions into the atmosphere, soil and water – and recycling potential are assessed in ‘cradle to grave’ studies. Such a study was conducted by the Technical University of Berlin on various drinking water pipe systems, including galvanised steel, copper, and plastics: cross-linked Polyethylene (PE-X), Polypropylene (PP-R), Chlorinated Polyvinylchloride (PVC-C) and Polybutylene (PB-1).

For all comparative indices, Polybutylene was rated as one of the products delivering the lowest levels environmental impact. Polybutylene is regarded highly in the area of sustainability, demonstrated by demanding national and international standards, and extensive long-term testing. Polybutylene is classed as 'environmentally friendly' – consuming less energy during manufacture, conversion, installation and use than its competitors. As a non cross-linked polyolefin raw material, it can also be recycled.

Polybutylene pipes are expected to have service lifetimes of 50 years when exposed to water containing 4 ppm chlorine at 60°C. Moreover Polybutylene pipe has been shown to perform for >1,000 hours in chlorine content of 30 ppm at 30°C/6 bar (Test Report-No. PB 1087C, Infraserv Höchst Technik, 2004).

Uninterrupted pressurised operation for up to 50 years and counting

Polybutylene pipe applications installed in Europe for underfloor heating (since the early 1960s) and district energy (since the mid 1960s) are still operating successfully.

Polybutylene pipes were installed in the Vienna Geothermal Project in 1974, replacing metal pipes which proved unsuitable due to rapid corrosion and operated until 2010 when an updated system was installed. The Vienna Geothermal project utilises very aggressive geothermal water as the heating medium. The Polybutylene piping system ran continuously for 36 years at a constant temperature of 54°C and a pressure of 10 bar until replacement due to system reconfiguration.

Polybutylene is often referred to as Polybutene, PB, PB-1 or Polybutene-1