In the mid 1990's a US lawsuit (Cox) claimed defects in "Polybutylene plumbing systems". The premature failures in the USA, allegedly caused by Polybutylene, were due to the incorrect use of acetal fittings and poor joint assembly techniques. While no official ban exists in that market, in view of the outcome of the US litigation, Polybutylene or products from Polybutylene are not sold for use in North America.

The US Legal Case

What happened in the US legal case?

Co-defendants were sued in the mid 1990’s with claims alleging defects in “Polybutylene plumbing systems.”

Shown above: From the legal case, are examples of fittings in a variety of materials that were included in the complaint against the so-called “Polybutylene plumbing systems.”

Polybutylene use in EU & ROW

Polybutylene piping systems have a record for long-term reliability and high performance in Europe and Asia, but were targeted with legal action for alleged system failures in North America.

There are four possibilities for joining PB-1 pipes with compatible fittings. These are: 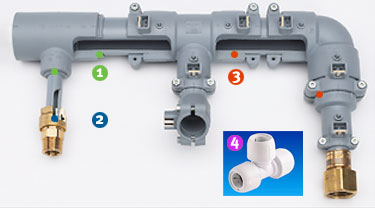 The combination of materials and jointing method must be correct and designed accordingly to make a sustainable linkage.

Polybutylene has been in continuous service in Europe and Asia for over 40 years in pressurised hot and cold water installations and is widely recognised as the state-of-the-art technology for these systems.

Assessment of Polybutylene Plumbing Installation after 18 Years of Service
Presented at Antec 2013 – independent study (onsite evaluation and lab testing) of the condition of a polybutylene (PB) plumbing system in a multi-unit apartment complex.   download

Customer base and track record

Are Polybutylene pipes banned in the USA?

No – there is no US ban on the use of Polybutylene for piping systems.
PBPSA members have made the decision not to sell Polybutylene pipes in North America in view of the outcome of the US litigation process in the 1990's against the case co-defendants.

Polybutylene is often referred to as Polybutene-1, Polybutene, PB, or PB-1.