In today's competitive shipbuilding market, companies are searching for new materials and systems that will extend the service life of their ships and on-board systems, reducing maintenance costs and improving the passenger experience. As a result, high quality, long lasting plastics such as Polybutene-1 (Polybutylene, PB-1) are increasingly being specified for onboard piping systems, particularly for the pressurized delivery of hot and cold water.

Seeking to reduce costs and extend the lifespan of onboard systems

The cruise industry hosts over 30 million passengers per year and has an annual global output of $134 Billion (2019 source: CLIA). When carrying large numbers of passengers across oceans, health and safety are basic requirements, along with high levels of comfort. These essential industry objectives come at significant cost. As a result, shipbuilding owners and contractors are focused on sustainably addressing the challenges related to onboard infrastructure, facilities and related energy usage as early as possible in the ship design process. 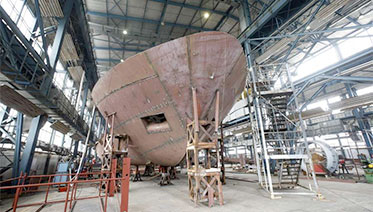 Polybutene-1 (Polybutylene, PB-1) is an excellent material for shipbuilding piping systems used for the following applications: 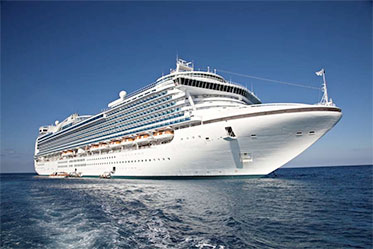 PB-1 is specified for challenging environments

When compared to other polymers, Polybutene-1 (Polybutylene, PB-1) offers the most comprehensive list of physical capabilities across the mechanical properties spectrum. Products made from PB-1 used by shipbuilders include: 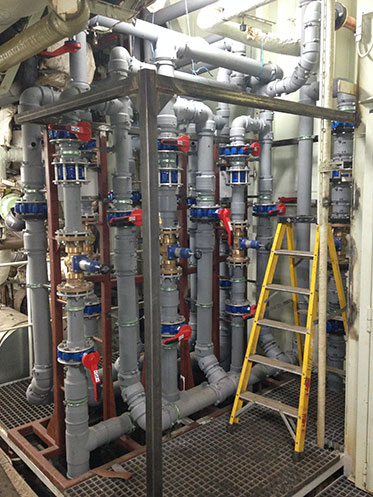 Suitable for cooling and air-conditioning 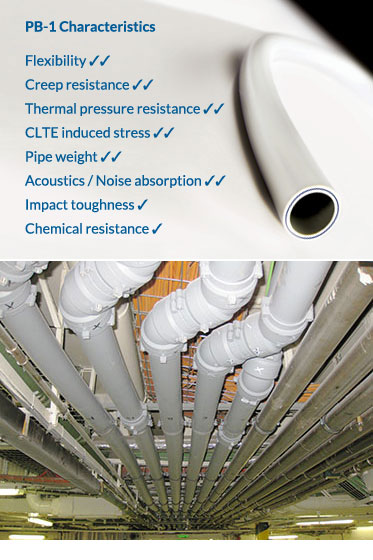 Polybutene-1 piping systems (Polybutylene, PB-1) have an array of performance advantages which have made the material the latest generation choice for piping systems installed on ships

If freezing does occur, the pipe expands to take account of the added volume, returning to its normal dimensions when the thaw comes. The same PB-1 thermal characteristic operates in reverse making them cool to the touch, even when high temperature water is being transported.

In marine environments PB-1 piping systems are corrosion-free and will not scale-up with hard water.

They absorb and suppress sound, rather than transmitting it and they are not subject to 'water hammer' particularly in areas noted for high water delivery pressures.

Long-term ISO 9080 tests performed on Polybutene-1 pipes project service lifetimes of 50 years or more for PB-1 hot water pipes operating with water at 70°C, at 10 bar pressure.  ISO 9080 tests are carried out according to international protocols by independent and accredited test agencies such as EXOVA.

A comparison of available jointing techniques between piping systems polymers

PB-1 is a versatile material for all available jointing techniques

Acoustics is among the superior properties of Polybutene-1 piping systems

In consideration of the close proximity of passengers on ships  and with increased expectations of comfort, noise levels and acoustic properties of piping systems, acoustic properties are a significant consideration for shipbuilding. Piping systems that minimise fluid noise and water hammer where pipework passes through ceilings and walls are a key element in addressing passengers’ noise concerns.

Among the superior properties of Polybutene-1 in comparison with other materials its excellent sound dampening. The combination of thinner pipe wall construction, low elastic modulus and low specific density in Polybutene-1 pipes (ρ = 0.9 g/cm3) leads to high absorption of “water hammer” and other noises associated with heating and cooling in pipe systems.

The higher the SDR Class the lower the water hammer at a given flow rate. PB-1 has the highest SDR Class compared to PP-H, PP-R, PE-RT and PEX

With the inherent density of ship cabins the noise levels and acoustic properties of piping systems are a significant issue. Piping systems that minimise fluid noise and water hammer where pipework passes through the internal ship structure are a key element in addressing passengers' noise concerns.

Per above, at the same water pressure, the larger inside diameter of PB-1 50mm outside ø pipe delivers a substantially higher flow rate than the other two materials.

Taken the other way, at a given flow rate PB-1 pipes yield a lower pressure loss requiring less energy to run systems and/or pumps with a lower capacity.

Flexibility is an advantage offered by a number of plastics in comparison with metals, however Polybutene-1 is clearly the plastic material of choice as illustrated in the following table, where typical flexural elasticity values of various polyolefin pipe materials are compared.

The advantages of flexibility during the installation and service of Polybutene-1 piping systems are described in detail on this website and are particularly applicable to the requirements of shipbuilding. Obviously, the easier a pipe is to manipulate on site and in tight situations, the lower the installation time should be.

In this respect, the ease of cabling through drilled holes and threading through confined spaces, combined with long pipe runs available in coils and therefore a reduction in the number of fittings required, are all factors which contribute to the speed of installation and associated reduction in labour costs.

Although Polybutene-1 pipe is easily flexed, care should be taken not to bend the pipe to the point of 'kinking'. In this respect, a minimum bending radius of 8 times the pipe diameter is recommended.

PB-1 piping systems have revolutionised how pressurised hot and cold water systems are installed in ships. No bending tools, no flame, no fluxes, no chemicals.

Piping systems from Polybutene-1 (Polybutylene, PB-1) have revolutionised how hot and cold water pressurised systems are installed in ships. With the installation of PB-1 piping, no bending tools are needed, no naked flame, and no fluxes or chemicals.

Pipework of up to 50mm in diameter is supplied in lightweight and easily handled long coiled lengths. Installations can be made in structures before ceilings and walls are fitted and flexible PB-1 pipe can be cabled around obstructions and cabled through tight areas making it perfect for shipbuilding refits. Continuous, flexible pipe means fewer joints providing greater system integrity.

With PB-1, many installations can be made without accurate pre-measuring, since it is easy to measure and cut in situ. Also, the light weight and ease of handling of PB-1 piping allows factory pre-fabrication and rapid on-board installation or when a cruise ship is underway when timing is critical.

Legionella is a bacteria occasionally naturally present in water distribution networks, and presents a potential danger to the health of the users of these installations.

The factors to combat to prevent the reproduction of this bacteria in piping systems in buildings are its reproduction temperature and the formation of a biofilm as a substrate for the feeding and colonisation of the bacteria.

The reproduction temperature of Legionella is between 20° and 50ºC, so water temperatures within this range must be avoided. On the other hand, the formation of a biofilm is aided by the accumulation of stagnant water, the temperature within the aforementioned range, the roughness of the piping and the possible corrosion of its metal.

The annihilation temperature of Legionella is established at 70ºC, and this is why thermal disinfection treatments require fluid to be heated to this temperature.

The international standards for production consider this working temperature for this application, where Class 2 is defined as applicable. The best choice of material for this problem is Polybutene-1, and with good design and appropriate maintenance of the installation, potential problems of Legionella can be avoided. PB piping, due to its low roughness, the lack of metal corrosion, and its optimum resistance at 70ºC (annihilation temperature of the bacteria) is ideal for preventing Legionella problems. They are, in addition, suitable for annual chemical disinfection treatments (30 ppm of Cl at 30ºC, 6 bar and for 2 hours), according to tests performed by the manufacturer of the raw material, LyondellBasell in independent laboratories.

Environmental impact study of piping materials by the Technical University of Berlin rated the impact of Polybutene-1 as low.

For all comparative indices, Polybutene-1 was rated as one of the products delivering the lowest levels environmental impact. Polybutene-1 is regarded highly in the area of sustainability, demonstrated by demanding national and international standards, and extensive long-term testing. PB-1 is classed as 'environmentally friendly' – consuming less energy during manufacture, conversion, installation and use than its competitors. As a non cross-linked polyolefin raw material, it can also be recycled.